Why we like him: Big Ben was a classic case of a promising young arm being destroyed by a shoulder injury. At 6'7" and 200 pounds, McDonald was an imposing figure on the mound. While with the Orioles, he  managed to put together a few nice seasons before he even turned 27. He demonstrated some good control for a young pitcher and posted a pretty good win total and ERA every year. He left Baltimore for Milwaukee in 1996, but began experiencing shoulder problems. In 1998, McDonald had rotator cuff surgery from which he never recovered. He was traded to Cleveland as part of a deal for Marquis Grissom, but never pitched for the Indians. His career record finished at 78-70 with a 3.91 ERA. That's the face of a random reliever.

Why we like him: What's not to like about a journeyman reliever who pitched for 4 teams during a fairly impressive 11-year career? Radinsky was a middle reliever who came into the league in that role and left in that role. He pitched in 557 games, never started one, and saved just 52. His career record was actually a pretty spiffy 42-25, and his ERA finished up at 3.44. Not too shabby for a middle reliever during the steroid era. He also served as pitching coach for the Indians in 2011 and 2012.

Email ThisBlogThis!Share to TwitterShare to FacebookShare to Pinterest
Labels: 1992 Topps Why we like them: When you think about the most violent home plate collisions ever, this is the one should immediately come to mind. You could feel it through the television. In Game 4 of the 1991 World Series, Terry Pendleton hit a drive over the head of Twins centerfielder Kirby Puckett, which gave Smith reason to think he could score from second after watching it drop. The relay was whipped to the plate, and the ball and Harper were waiting. Smith barreled into the catcher, and Harper somehow held on for the out. It rattled the teeth just to watch it. Minnesota held on to win the game 3-2. (The collision also made for one of the coolest baseball cards of the 1990s, as you see below) Harper enjoyed a 16-year career as a .295 hitter. Smith played for 17 years and batted .288. Smith and Harper were even teammates on the 1985 Cardinals before Smith was traded to the eventual champion Kansas City Royals that season. Who did the Royals beat in the Series? You guessed it. Harper's Cardinals. Why we like them: The World Series has had its share of dubious calls, but I'll always remember these two for their incident at first base. As Gant rounded first base on a single in Game 2 of the 1991 Series, Hrbek caught a throw and applied a tag to Gant, who was back in safely...until Hrbek used his 240-pounds of lard and a combination of a leg-grab and kicking motion to pull Gant's leg off the bag and tag him out. Umpire Drew Coble swears Gant's momentum would've carried him off the bag anyway. Right. Atlanta lost the game 3-2 and the series in seven games. Hrbek even received death threats because of hit "T-Rex Tag" maneuver. 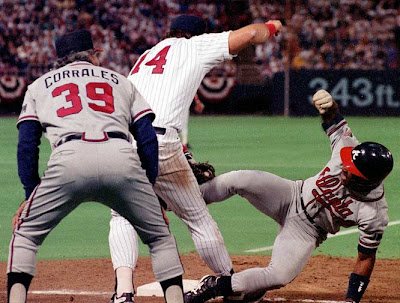 Hrbek played 14 seasons with the Twins and finished as a .282 hitter with 293 homers. He'll also go down as one of the more beloved Twins in franchise history. Not bad. Gant played 16 seasons for 8 different teams. He was one of the league's elite players from 1990 to 1993 and even posted back-to-back 30/30 seasons in '90 and '91. He missed the 1994 season (didn't we all) because of a motorcycle accident and was never the same player after that. I'll always remember his insane ability to pull any pitch at a right angle to the pitcher fondly. Why we like them: That popping sound you just heard was just Mike Redmond lacing another double off Tom Glavine. Of all the inexplicable cases of random hitters dominating a legendary pitcher, this is one that I'll always remember. Redmond owned Glavine. Redmond batted .438 against Glavine over the course of his career. Sure, Glavine won more than half the time, but barely. Redmond also perplexedly posted an OPS of 1.075 versus the 300-game winner.

Redmond, who is in his first year as manager of the Marlins, did bat .330 against left-handed starters over the course of his career, which made him an extremely valuable commodity as a backup backstop, and his career average overall evened out to a nice .287. Glavine, of course, won a pair of Cy Youngs and 305 games. But he always had trouble with Mike Redmond. Why we like them: Now this is a rivalry. Dodgers and Giants. You can actually feel the tension by simply reading those words together in the same sentence. Back in 2001, this rivalry reached a point where it needed something besides a steroids-infused mutant slugger to shed some light into these two clubs' hatred for one another.

Marvin Benard, a surprisingly good and amazingly annoying platoon outfielder, decided it would be a good idea to run over LA catcher Chad Kreuter to score despite the fact that he probably had to go out of his way to do so. What a jerk. 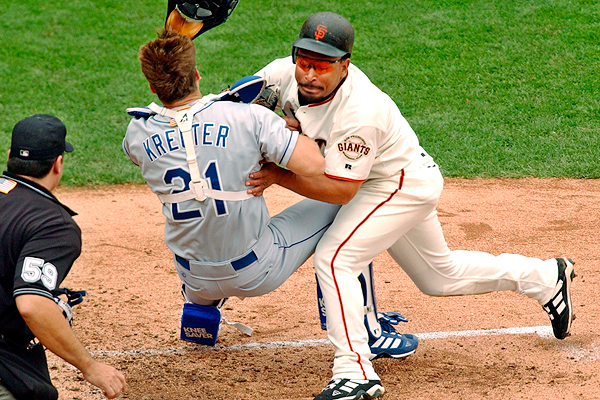 Benard played for 9 seasons in the majors, all of which with the Giants. He was a career .271 hitter and even posted a .322 average in 121 games in 1998. Kreuter played for 16 seasons with 7 different teams and made a name for himself as a light-hitting but competent backup catcher that might have been a useful asset on every third day if your team already had Paul Lo Duca. Both retired in 2003. 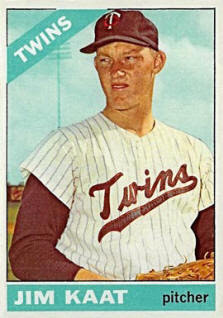 Why we like him: Jim Kaat pitched for 25 seasons and until he was 44. Obviously, the guy managed to stack up some impressive numbers over the course of his career. He was a 3-time All Star and a reliable workhorse for the Minnesota Twins in the '60s and '70s. He won 20+ ballgames three times during his career and finished with a 283-237 career record.

Many might even know Kaat better for his work on the microphone instead of on the mound. He's been in broadcasting since his retirement in 1983. He's called games for YES and NESN, and he's currently working for MLB Network calling games at the ripe old age of 74.